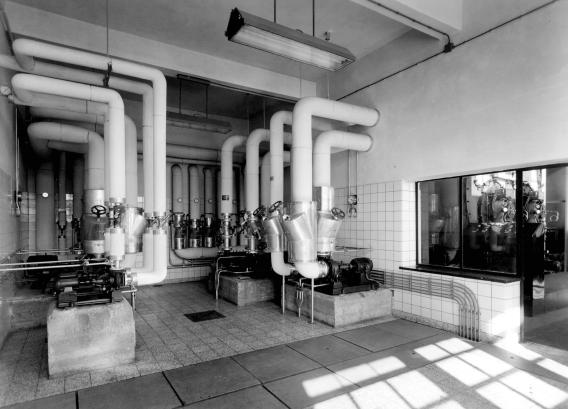 Axima is EQUANS' historic brand for HVAC installations, cooling solutions and fire protection. Merged into EQUANS in July 2021, Axima combines its expertise with that of Fabricom and Cofely Services to improve the performance and efficiency of industries, buildings, transport infrastructures and distribution networks.

The history of Axima begins with Fabricom setting up an independent HVAC division. A new company is formed in 1971 and named Fabricom Air Conditioning. Its first major contract is to install the air conditioning in the WTC 1 & 2 towers near Brussels North Station.

Fabricom Air Conditioning benefits from the expansion of the Brussels real estate market.

Fabricom Air Conditioning is growing steadily, notably thanks to contracts in the Middle East and in the Belgian nuclear industry.

Axima Contracting takes over the activities of GTI in Belgium.

Following the merger of Suez and Gaz de France, the two groups' services divisions are combined in the entity GDF SUEZ Energy Services; Cofathec is integrated into Axima Contracting and Cofely Services. Thermoco and ISB remain separate companies under the umbrella of Axima Contracting.

Axima (which now includes Axima Contracting, Axima Refrigeration, Thermoco and ISB) becomes Cofely Axima. The name change is intended to increase awareness of the Cofely brand and to bolster the visibility of the synergies that the companies in GDF SUEZ Energy Services' Benelux division can offer.

Alongside Cofely Fabricom and Cofely Services, Cofely Axima is then a provider of energy-related services and offers solutions in HVAC, refrigeration, air conditioning, piping and fire protection.

GDF SUEZ becomes ENGIE. This new name embodies the dynamics of change in the face of the challenges of the energy transition. At the same time, the Belgian entities of GDF SUEZ change their names again and become ENGIE Axima, ENGIE Fabricom and ENGIE Cofely (for the energy services division), as well as ENGIE Electrabel (for the electricity division).

In order to better support their customers in their transition to carbon neutrality, ENGIE's service entities in Belgium (ENGIE Axima, ENGIE Fabricom, ENGIE Cofely) are brought together under ENGIE Solutions to distinguish them from their sister company ENGIE Electrabel, the Belgian market leader in energy sales and the largest producer of green electricity in Belgium.

Creation of the EQUANS brand, leader in multi-technical services. EQUANS is now an autonomous entity within ENGIE, under the general management of Jérôme Stubler, and includes all ENGIE Group's service companies. In Belgium and Luxembourg, ENGIE Solutions, which brings together the ENGIE Axima, ENGIE Fabricom and ENGIE Cofely brands, becomes EQUANS.